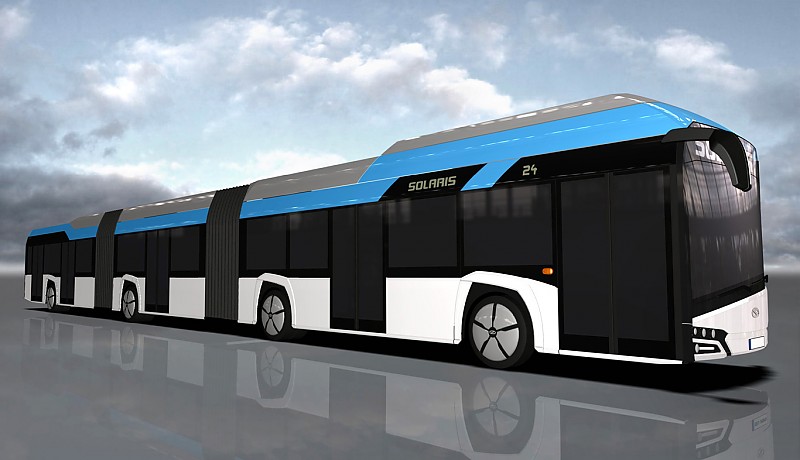 ‘The first Polish MEGA class bus with multi-axle electric motor powered by low-emission gas’ that is official name of a joint project of Solaris Bus & Coach S.A., Warsaw University of Technology and Poznan University of Technology. This impressive endeavor is financially supported by The National Centre for Research and Development (NCBiR) within the InnoTech programme.

The ambitious project is about designing, building and eventually testing a mega class bus of over 20 metres in length, which is to be powered by electric motors and fuelled with low-emission gas.

“Today we can announce that we are working on a bi-articulated, 24-metre bus. The vehicle will be powered by electric motors. Batteries will be charged with the use of an outside source of energy or through fuel cells mounted on the bus. Not only the extremely advanced technology is extraordinary in this prototype, but also its unusual length. Our objective is to create a completely emission-free means of urban transport. This bus could compete with a tram thanks to its unusually big passenger capacity,” said Dr. Dariusz Michalak, Deputy CEO of Solaris Bus & Coach S.A.

The total volume of the project is nearly €3 million, of which almost €1.5 million is funding from The National Centre for Research and Development within the InnoTech programme. The implementation of the project was planned for the period from December 2012 to November 2015. However due to the fact that Solaris intends to increase the volume of research and development work, the company currently is consulting with NCBiR about an extension of the project for a further year.

Solaris recently applied similar drive technology in two 18.75-metre articulated electric buses, which were delivered to Hamburg in December 2014. The new project is intended to create an even more technically advanced product, if only because of its length.

“It is extremely challenging to provide a solution for the control of the bi-articulated vehicle which is designed to run on streets, not on rails. We are at the final stage of engineering works and soon we will move on to building a prototype which will subsequently go through a series of tests and evaluations,” stated Dariusz Michalak.

Apart from the general blueprints of the bus, the new vehicle’s visual design has also been finished. The 24-metre Solaris will be based on the new version of the Urbino family that had its world premiere at IAA exhibition in September 2014.

After research and development work the new construction will enlarge Solaris’s product range. Interest for the new product of engineers from Solaris and the Universities of Technology in Warsaw and Poznań has already been noted, in particular from German and Scandinavian operators.